This month there was a lot of great steps in Luna’s training. We are overall very impressed by this little girl and her abilities. She seems to be born for canicross, she sure loves it and wants us to be proud of her. 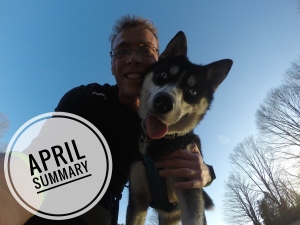 So our April training got a bit less sessions than usual, only 6 sessions in the month, as you can notice. This can be explained by the sh***y weather we got. It rained a lot this month. I have in mind a particular week-end that we were stuck inside all week-end long, because of an ice/snow storm… in the middle of April… Welcome to Canada!

Some would say, rain or shine, go for a run? Well, because Luna is still a beginner, we did not want to add the rain as a new distraction. She has already a lot of distractions to deal with.

But something you may have noticed, is that we got more kilometres in less sessions. Because for some of the sessions we started to increase the distance a bit. Our basic training is now closer to 1.5k than 1k, and we had two longer runs. 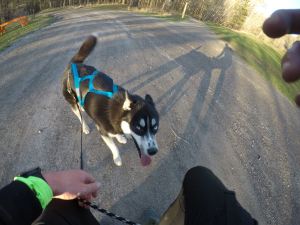 Just a general comment we realized this month, is that Luna is running better when we go back to the car’s direction, than when we leave for a run. We don’t really understand why, but she would be a totally different dog on both directions. We discussed about it with the trainer we met at the workshop in February. She was suggesting that we use the “carrot” technique. Which would be either me waiting at the end of the trail while Luna runs with JC, so Luna would run towards me and be willing to go that way to go meet me. Or have me on a bike in front of them while they run, so it would be the same idea, Luna wanting to run towards me. We will have to try those tips next month.

As you may know, I am injured in the knee for a while. It should get fixed in May, which would be awesome. I am starting to really miss running, so I wanted to try running with Luna for once, thinking that it’s only 1k, it should not be too bad. Well… Let me tell you I shouldn’t have run that day. First, it was way too hard on my knee, and it felt really bad the next day. But for both of us it was confusing. Luna is used to run with JC, so she was really confused to run with me. She wouldn’t move forward because JC was behind, and only started running when we ran towards JC. She was not listening to my commands. But if you look at my side of the story, I am used to watching the trainings, and thought I would do well. But it’s not the same when you actually do it, and I got to realize that. I was saying the commands way too late for Luna to understand and do it. I was also not praising her enough when she was doing good. So we will definitely have a lot of work to do once I’m healed.

After chatting a lot on Instagram, we finally got to meet with Gina and her dogs Cujo, Eska and Misha from @k9riverracers. We went for a training together. It was a beautiful day, the sun was finally shining and we went running by a lake so it was really nice. She was on the scooter with her girls, while JC was running with Luna. Then we tried to hook Luna up to the scooter with Gina and Misha. It was a lot of first times: first time on the scooter, first time with another dog, and first time with another handler. And she did amazing. She seemed to have a lot of fun, and did really well so we are super proud of her. Then JC and I tried the scooter as well. Which made us think about two things: we need to buy the bikes really soon so we can do bikejoring, and we need another puppy soon haha 🙂

For the first time, we encountered an off leash dog during one of our training. JC was running with Luna at the olympic field close to our place. There was a guy playing with his dog in the middle, JC thought it was going to be a concern but it was not. The issue came from another lady, who had her small dog on leash. The smaller dog got so excited that he escaped her owner, and ran towards Luna and JC. JC was super pissed, because the owner was not able to handle her small dog, did only recall him but did not run after him to catch him before he got to them, and the dog started to be aggressive towards Luna. But Luna did amazing, and did not get too distracted. She stopped when the other dogs arrived, which is obvious, but once they were gone she did not get distracted and stayed focused on her training. Which is very impressive for a beginner, we would have thought it would be the end of our training. She once again impressed us!

JC went for his first “long run” with Luna. In the local conservation area we go to, there is a main loop which is about 3.7k. He started running this loop, did a few walking breaks, took a few water breaks too, but they did run about 2.5k. It was her first long run, but she did handle it pretty well. We still want to go slowly and not be too hard on her, but we don’t want to be too protective as well. So we try a few things and see how she reacts to it. Looks like she would be able to run a bit longer now.

This past Saturday, JC ran a 10k trail race. It is part of his personal training, to run a 25k trail race end of May. He is now working on trail running, to get better at canicross with Luna. He did really well and finished 12th in 46:10. It was his first trail race, which was rainy and muddy haha.

We had decided to take Luna with us that day, so she can get used to the crowd and the excitement of the race, in planning for our future canicross races. She was really excited!! She got to meet so many people, kids, there was smells everywhere, people running… But she did well! She managed to settle down a few times. She did not really understand when I was cheering up and clapping my hands so we would jump on me, which made JC laugh when he passed us 🙂 She had her custom made bandana “Go Daddy Go”, which a lot of people said it was cute.

What are your goals for May? Let us know if you have anything exciting planned!!