Introducing the new member of our team: Bolt

Sorry we have been inactive on the blog lately, but we had a busy summer. One of the reasons being that we welcomed home a new member of our team: Bolt!

You may have already seen his face on our Instagram and Facebook, but I thought it was time to officially welcome him on the blog!

Bolt is a 3 months old Siberian Husky. He comes from a breeder in Timmins, Ontario. We had to drive 8 hours to pick him up!

His breeder is doing recreational mushing. She is not a racing kennel, but Bolt’s parents are doing mushing over the winter, which means it’s in his genetic to run!

He is part of a litter of 6, five males and one female. We had hesitated for a while over which puppy to pick, because we really loved 2 of them and could not decide. We ended up deciding for Bolt because he was the most adventurous of the two and because of his unique marking. We fell in love with his marking and his beautiful blue eyes. The breeder told us he would maybe be the most challenging of the litter for his owners, but we like challenge 🙂 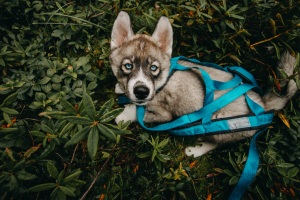 We drove 8 hours north from home to come and pick it up. He was an absolute angel on the drive back home. No accident in the car! He was excited and restless for the first 3 hours, but that’s totally normal, we were his new friends and that was exciting. But then he just slept the whole time and he was so adorable.

Luna was not sure about him at first. She is jealous of other dogs coming to us in general, so we were expecting her to be jealous. But it took her just two days to warm up to him and now they are best friends. A bit too much friends, they are unstoppable together. The challenge starts already 🙂

So Bolt will leave his first racing season as a spectator, and a help for the organization. He will be here to cheer on his sister Luna being a champion and running fast. We are sure it will be beneficial to him to leave on the races right from the puppyhood.

Speaking of running fast, why Bolt? We wanted a name that means he will be a fast runner, or something running related. We had tons of ideas but none that really was outstanding: Thunder, Raiden, Storm. One of our friends suggested Balto, as the famous sleddog. I loved the idea! But JC wasn’t keen on the idea that it’s also a famous Disney movie. So we decided for Bolt, like a lightning bolt, or like Usain Bolt, the Jamaican runner. How do you like his name?

We will of course share more of Bolt now, and we will be happy to document his learning of the sports once he is old enough to start running. Please give a warm welcome to Bolt!