March is a transition in seasons. With daylight saving time change, it is finally day light later in the evening, so we don’t run at night time anymore.

But it also means rainy days and weird temperatures. Our March weather here was pretty cold, or let’s say up and down on temperatures. Some days would be warmer, so the snow would melt and result in lots of mud. But the next day could be negative temperatures, so the mud would freeze and the trails are really difficult to run onto.

A lot of our runs were muddy, which was also funny at the end of our training when we reward Luna for the great run with kisses and hugs. You would both end up really muddy!!

These past weeks we have tried to increase a bit the speed and duration of our trainings. Really slowly, because Luna has not been cleared by the vet yet. But we tried to do more running than walking, with some sessions that were run only. And we also ran a few times up to 1.5km instead of 1k. Baby steps!

Gee is still not 100% known, but she did some good progress on it. As well as Line out. This one is known to be one of the hardest one to learn. Sometimes she would do it perfectly, and sometimes it’s still a work in progress. Again, we are happy and celebrate baby steps! 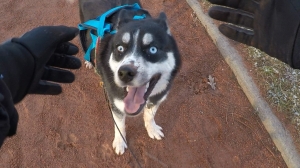 We have tried a new conservation area. That was a success, so we will keep this area on our list.

We noticed that Luna does not like to run in the city. The street block close to our house is nice as it’s not too crowded, and we can work on distractions – people, dogs, birds, squirrels… and work on directions. But we noticed the few times we ran in the city, she was not pulling as much and the session was more difficult. However, when we go to our local conservation area and run on trails, she is pulling way better. So we just need to find some balance, as we still need to work on distractions and directions.

We started our Facebook page!! We will post more about our trainings, what we worked on, how did it go. And we will also post about our personal individual runs as well, to document what we personally have to work on to keep up with Luna. As I mentioned in my previous post, canicrossing is different than running. So we need to train on faster runs on shorter distances.

April is an important month! Luna will be one year old on April 18th! Which means this big girl will get a vet appointment to get an X Ray to check her hips and joints. We hope she will get cleared out so we can increase the distance and duration of our runs!

We may also register for our first race! This would be in June, it’s a short run, so it would be more for fun than anything else. Stay tuned, we will release more details once we register!

How was your March and what are your goals for April? Let us know in the comments below!