So today let’s talk about the difference between running and canicross. I’ll let mom write this one, since I don’t know what it is to run without your dog (probably a very boring thing, if you ask me…).

Canicross is a lot different than running.

Running: I used to love nice running clothes, and had some gear of all colours: blue, pink, red, multicolour, you name it. I like running in nice clothes, and I like to choose my outfit for today’s run.

Canicross: so now I need everything blue to go with Luna’s harness so we can match. That’s if you go from someone like me who like nice running clothes. If you don’t care, then you still don’t care haha 🙂

Getting ready to go for a run

Running: Choosing the right outfit, dressing up, get your hair in a pony tail, add any extras in winter like gloves, hat, put your running belt on for your phone and your keys, put your music on, let’s go.

Canicross: All of the above, plus putting the harness on, putting the canicross belt and bungee on. And if you don’t have a nice trail to go canicrossing close by, prepare all of the canicross equipment in a sport bag, prepare the water and the bowl. Going out for potty, and then go.

Running: when you’re a runner, Christmas and birthdays are opportunities to save money for your next gear. Which, if you’re a runner, would be a Garmin to have some nice data of your runs, some nicer shoes, the latest Nike running sweatshirt…

Canicross: Whenever you have some opportunity to save money, it would be for trail shoes, a new harness, a GoPro to record your runs with your dog… All the way up to a bike, to try out bikejoring in a few months.

Canicross: Trails. Anywhere but pavement. So most of the time you have to drive to a park, forest or conservation area.

Running: If you’re like me, you ALWAYS forget to take some water with you. So in summer, you suffer, you are thirsty, you try to find any possible water available publicly.

Canicross: now you HAVE to think about water. It’s not just you anymore, you have to get water for your 4 legged running buddy. Water is really important for the dogs, especially when running. So now we always make sure to get a bottle of water and a bowl for Luna when we go for a run. When we will go for longer runs, we will get a water bottle with us, on the belt.

Running: when you’re a runner, the fun in running is to get some solo time. You get some time to think, cut from negative thoughts, listen to music, get in a bubble with you and just you. Which is an awesome feeling. But…

Canicross: you are not solo anymore, you’re a team, and that’s even better. Canicross is about sharing an activity with your dog. It’s an amazing bonding activity. It’s all about complicity, respect, listening to the other and trust. It is honestly the best feeling in the world. You just make one with your dog, and you are a team. It’s just the two of you. 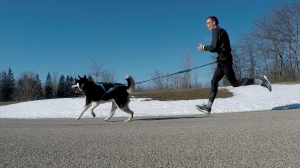 Now, which one is the best? I tried to present both running and canicross with some humor. Both have a lot of good things. But if you ask me, there’s nothing better than running with your dog, and being a team with the best running buddy, who just wants to make you happy. It’s the best feeling in the world, and you should really try this out!!

But in the same time, one does not go without the other. When you canicross, you also need some solo running sessions from time to time. You need to train yourself too, to get faster, stronger, more endurant, to be able to keep up with your dog.